Leadership from Below
​
A Bella Caledonia article that looks at the flourishing of mutual aid groups across Scotland and the potential for sustaining and nurturing these groups beyond the immediate crisis. It includes a section on Bridgend Farmhouse, our initial emergency response and how we are making as much of our services available in appropriate ways for this crisis. 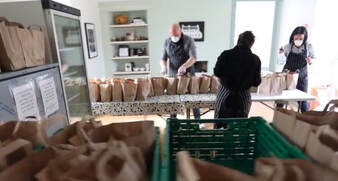 Bridgend Farmhouse in South Edinburgh is among countless community organisations which have had to think fast and find innovative ways of offering help after their services were rendered impossible to deliver under social distancing guidelines.

In normal times, the farmhouse operates as a community hub for learning, eating and exercise. “It gives people somewhere to go who are socially isolated and it’s an important part of their routine,” interim manager Lynn Houmdi explains. “It was really difficult to have to shut our doors to those people.”

But the team behind Bridgend Farmhouse quickly began planning a new approach, which would centre around meeting an urgent need for food – both among people who had been in food poverty before the crisis, and those who were pushed into poverty or isolation as a result of it. “We were approached by a local chef who was well connected with other chefs, and we recruited a team of volunteer chefs and a packaging and distribution team of catering managers, many of whom have recently lost their jobs.”

This forms part of a partnership with chef Lewis McLachlan’s Empty Kitchen, Full Hearts programme which is working across the city in response to the crisis. There is high demand for the initiative and 80% of the farmhouse’s deliveries have been organised through local community organisations who know the people in their areas and are able to get the food to those in need.

“In the first two weeks we delivered 100 food parcels per day and we are now working towards 300 parcels per day. We just passed 10,000 meals in the first month,” Houmdi says.
Bridgend Farmhouse is already planning the next stage of its response. “We’re going to be delivering services we normally did online, such as open drop-in sessions; we’re looking into ways of providing laptops to people who would be excluded from accessing things like Zoom; and we are working on ways to make bikes available for key workers.”

Beyond this, the organisation is mindful that the present crisis will “worsen a lot of other issues for people in the community” and that it’s essential to start planning now for how to transition from lockdown and find ways to reduce social isolation. This is something Houmdi hopes will be aided by new relationships which are being formed with community groups and people. “While this is a crisis response, a lot of this will have long term benefits and partnership working is a big part of that.”

Houmdi says she is encouraged by the “incredible” support that has been offered by volunteers and from companies in the form of in-kind donations. “I would hate to think that would dissipate after this.”
She adds: “If you think it will it’s going to be hard to get through this time. Our society wasn’t fair, and people were denied things they needed. If we go back to the way things were, then all of this, all these deaths, will have been for nothing.”