Charities’ vital role in covid ‘must be recognised’
​
Health charities failing to survive the covid-19 pandemic will lead to significant gaps in support services in the future, a leading representative organisation has warned.
This article is  reproduced from a  health and care scotland piece, you can also read it on their site here
We are reproducing it here as our emergency food response is cited as an example of quickly being able to adapt and take action in this time of crisis. 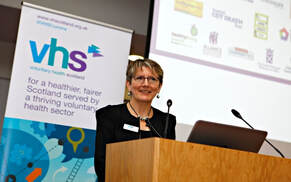 Claire Stevens, chief executive of Voluntary Health Scotland (VHS), described the sector as being like the “mortar between the bricks” in the wall of support during coronavirus.
Organisations typically plug ‘gaps’ in providing services not covered by the NHS or other public sector bodies, such as supporting people affected by illness and disability.
She warned the consequences of entire charities or services disappearing as a result of plummeting incomes were not being fully appreciated.
One medium-size cancer charity saw its normal fundraising income drop by 92% last month and has had to furlough half of its staff.

Last month Communities Secretary Aileen Campbell announced £350m of funding was being made available to councils, charities, business and community groups to help those most affected by coronavirus.
Ms Stevens said there had been welcome financial support for the sector from the Scottish Government and other funders such as the National Lottery Community Fund.
But she added: “Unless there is even greater recognition of the extent to which health charities actively contribute to health improvement, enable self-management of long term conditions, support people through crises and aid recovery, then there are going to be significant gaps in services in future if some of these charities fail to survive the coming months.

“The NHS and our other public services are quite rightly viewed as the bricks in a strong wall providing protection and care during covid-19.
“Charities, other voluntary organisations, social enterprises, faith and community groups are the mortar between the bricks, largely unnoticed but doing a hugely important job in holding people together and helping ensure the bricks can hold up the wall.”

A survey carried out by VHS last month found the revenues of many health and wellbeing charities’ has plunged as a result of the pandemic, while demand for services is soaring.
Ms Stevens said organisations faced massive challenges as a result of covid-19, including keeping services going for people with existing health needs, as well as for people thrown into crisis by coronavirus and the measures being taken to control its spread.

She added: “Health charities plug gaps, they typically provide services that the NHS and other parts of the public sector don’t provide.
“They are now trying to meet the needs of all the people they were supporting in the first place, but also for lots of other people whose new needs have emerged.
“So it is an absolute massive challenge - whether you are a large national cross-border UK charity or a medium size charity or a very small local charity.”

However Ms Stevens said the third sector was able to move quickly to adapt and take action as it has smaller infrastructures than large public sector organisations.
​She gave the example of Edinburgh-based charity Bridgend Farmhouse, which has moved from operating in a community hub to providing an emergency food response, by working with local chefs whose restaurants have had to close.
With the help of funding, 10,000 food packs have been distributed to vulnerable families who are shielding or socially isolating, or who have lost their jobs and income.
​
Ms Stevens said health charities were now beginning to focus on how to plan and organise in the “new normal” of a world with coronavirus.
“I think people are keen to stop calling it a crisis,” she said. “For the foreseeable future all we know is we are going to have to work differently.
“We are going to have to get on and find ways of supporting people without thinking this is going to end sometime soon - because we know it is not.”