Our own John Knox shared his experience of community asset transfer of our historic farmhouse in an article published in Holyrood Magazine, 11 May 2017. The full text is below and you can also read it here on the Holyrood Magazine website. 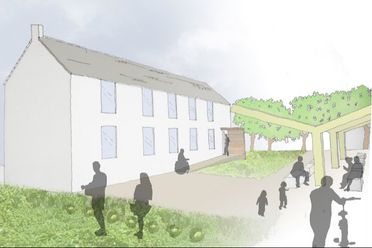 Where would the money come from? We would apply for grants.
Would the city council give us the building? We would campaign for an asset transfer, one of the first in the city and in urban Scotland.
We printed off a few leaflets, started recruiting members for a community action group, and were successful in being awarded a few small grants from the council and independent trusts.
We reached out to like-minded social organisations. Everyone seemed to like the idea but only a few were prepared or able to give us practical or financial support.
Members of the action group came and went, but the core remained, particularly our chair Will Golding.

We worked tirelessly, day and, usually, night filling out funding applications, contacting supporters, organising special open days.
We held several consultation exercises at the farmhouse and various outreach projects and events.
People chipped in ideas about the design of the building and outhouses and the garden.
The well-known Edinburgh architect Malcolm Fraser gave us initial free advice and support.
Time passed, and eventually one of the group's funding applications – to the Big Lottery Fund – came good. They gave us a starting grant to develop our ideas into a full application.

We were thus able to pay a for a consultant, Sandra Macaskill, who helped us draw up an almost 900-page application to the Big Lottery Fund, which included architectural drawings and a business plan for how the community centre would be viable in the long run.
She honed our ideas into a ‘centre for learning, eating and exercise’, which would link in with the park, the nearby allotments and the heritage of the place (a chapel probably used by Mary Queen of Scots used to stand on this site before it became a Victorian farm and market garden).
Meanwhile, we had been getting support through small grants from the city council and others to run short community education courses and activities and we were able to engage a part-time development worker, Hilary Morrison, to run a regular Sunday drop-in session at the farmhouse whilst we had a licence to use it, in its derelict state.
All of these proved successful…cookery courses for young unemployed people, forestry foraging, natural cosmetics, traditional stonewall restoration, arts and crafts, and much more.

The Big Lottery Fund seemed pleased with our plans and evidence of our ability to run a community centre, but they could only provide grant funding if we took ownership of the farmhouse before any grant could be awarded.
Knowing of our interest, the council put the farmhouse on the open market to establish its value.
Fourteen offers were made, the top one being for £215,000.
Months of lobbying the council during 2014 and 2015 resulted in councillors taking the new and adventurous step of transferring the farmhouse to our community organisation, Bridgend Inspiring Growth, for just £1 in 2016. (We did however have to pay substantial legal fees.)
The Big Lottery Fund was thus convinced that the project should be supported and funded, providing over £1m for the restoration of the building, a part-time build manager and community development worker for year one, and to fund two full time staff, for the first five years, to support the centre in becoming a sustainable social enterprise.
We’ve also been successful in gaining two other major grants, from Historic Environment Scotland and the Robertson Trust.
We are, too, in the process of forming a community benefit society which will allow us to issue shares and raise the final tranche of funds needed for the project.

Finally, the builders have moved in and work is underway to bring the old farmhouse back to life, to create a community kitchen and cafe, meeting spaces, and to add a series of workshops for activities such as DIY, bike-repair, wood and metal work and arts and crafts.
Our volunteers will be putting the finishing touches later this year – interior decoration, wooden outer cladding for the workshops – and early in 2018, Bridgend Farmhouse will be fully up and running.

It has been a long and uphill journey. Seven years of campaigning, meetings, form-filling, disappointments and triumphs.
“Making it simpler for communities to take over public land and buildings and strengthen their voice in the decisions and services that matter to them,” to quote the Community Empowerment Act, is not that simple.
But then, I suppose, we are among the first city pioneers to attempt it and councils and other public bodies are only now creating a system for ‘empowering’ communities in this brave new world.
We at Bridgend still have a long way to go, but by the year 2020 we hope we will have our ‘unique, environmental, alternative, community centre’ where folk in the struggling estates around us, in Craigmillar, The Inch, Moredun and Gilmerton, will find training for work, support for disability, a new hobby, a place to volunteer, a place to explore the woods and the local heritage, and a place to drop in for coffee and friendship.