Is twenty years old the most beautiful age? Not sure about that. In any case, it’s one of possibility. Malakye Outerbridge, who set out to conquer the world in autumn 2019, is the living proof of that fact. Originally from Bermuda, the young man landed in the UK last November. At this time, his goal was to attend a cookery school in Edinburgh to become a chef. Problem: in January, while staying at a friend’s in Newcastle, he realised that the school won’t open in April 2020, as he thought, but in August! What to do? “Because I didn’t have anywhere else to go, I went to Edinburgh” he explains.

When he arrived in the capital of Scotland at the beginning of February, Malakye settled temporarily at High Street Hostel, where he became a volunteer. The contract was simple: in exchange of a few hours of work a week, he got free accommodation. A windfall! Soon, he finds a job as a chef in a restaurant, 83 Hanover Street. “It was such a cool place to work. The head chef was really willing to try new recipes. In a fortnight, I already had my special: a vegan ceviche”, says Malakye. He was about to move into a flat when, in late March, the lockdown happened.
The restaurant closed, Malakye lost his job and, unfortunately, couldn’t even get furloughed: “You had to be on the company’s payroll before the 19th of March but because I was new, I didn’t qualify”. So goodbye to the flat, hello to hostel life: “I ended up sort of trapped there. Luckily, the place is quite chilled. It’s a massive hostel where only twenty of us live. And I still don’t have to pay anything”, he explains.

At the beginning of April, just as the Bridgend Farmhouse emergency food project started, Eric Fernandez-Baca, the food project manager, showed up at High Street Hostel: “He had a friend there and came by to drop off some surplus food. He got talking to me about the project and when I told him I wanted to be a chef, he proposed that I join the team”.

A few days after the encounter, Malakye came to Bridgend. “I went introduce myself to the kitchen when Eric grabbed me and took me up to the office. He asked me: ‘do you know anything about spreadsheets?’ And I told him no.” Malakye though, became the logistics manager. “In three days, I managed to set up a system that was doing 130 meals a day in two different postcode areas” he says. And in the following weeks, the young man worked flat out: “I was running the phones while developing the system and teaching myself google sheets. I would frantically research new functions to use.” he smiles.
Those first days, Malakye recruited other volunteers at the hostel for the Bridgend Farmhouse COVID-19 Food Resilience Response Project. Their role was the following: answer the phone and fuel the system with new deliveries. But the coordination of volunteers was challenging. It became clear that a smaller team, with smarter software, was the best model, and Malakye rose to the challenge.

“I essentially became a spreadsheet master. I know everything now. Whenever you need it, I got you”, he laughs.
Today, he isn’t even bitter for not having become a chef at Bridgend: “People are eating at the end of the day, that is good enough” he says.
Malakye doesn’t run the phones anymore: “I’m mostly working on system development and data analysis. I just do updates and I try to figure out how we can improve everything and stop things breaking”.

In July, when the lockdown will be lifted for the hospitality sector, he hopes to be rehired by his former employer in a part-time job. The rest of the time, he plans to keep volunteering at Bridgend. “The project is amazing and anyway, even when the lockdown will be over, there will still be some vulnerable people out there who will need food. We couldn’t say to them ‘sorry, we’re done now’”. 20 years old, the age of reason?
This article was written by Freelance journalist Lou-Eve Popper. You can see more of her work on her website here: www.louevepopper.com 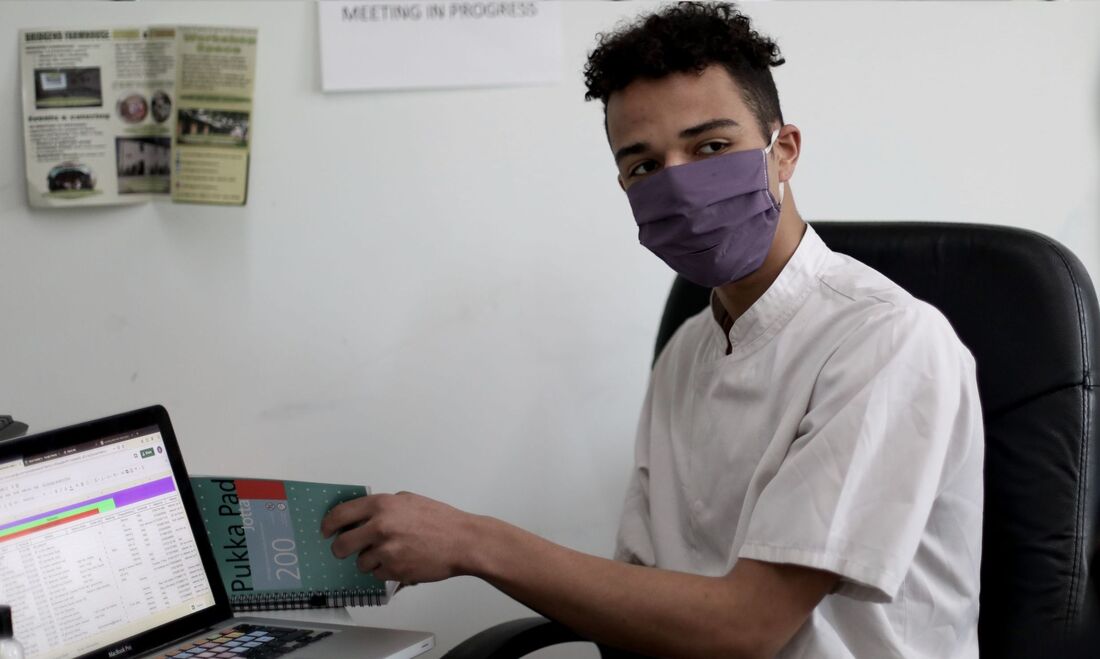